Our CITS suggested I use Splashtop to control my Promethean Board.  I have a slate, but prefer using the Ipad with splashtop. What I really like is being able to type from the IPad onto the screen. Beats juggling a blue tooth keyboard and slate.

Today I decided to try something with my kids. The way my room is set up, my library and horseshoe table are near my Promethean Board.  I have tried using the Promethean as a center, but the area was too crowded. So today I had them do a flipbook from Green Table using an Ipod with Splashtop. It worked great.

The flipbook was Rainbow Fish. The flipbook first took them to http://www.storylineonline.net/ where Earnest Borgnine read the story to them.  One of the good things about splashtop is it mutes the computer and plays the sound through the Ipad. At first it bugged me, but for this activity it helped. Only the kids in the station could hear the story. Then as a group they completed a list of main characters, a bubble map about the character traits of Rainbow fish at the beginning of the story, a story map, and bubble map of the character traits of Rainbow fish a the end of the story.

I rarely pay for apps but splashtop is worth the $4.99 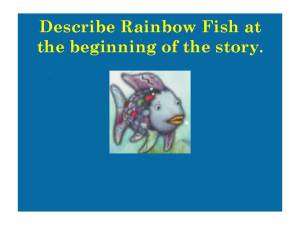